Four Royal Air Force Typhoon fighter aircraft took off at Coningsby Air Base, United Kingdom, on Monday, Apr. 24, 2017 and flew into the Romanian Air Base at Constanta for a four-month deployment under NATO's enhanced Air Policing mission.

The RAF detachment supporting the aircraft consists of 150 personnel drawn from across the RAF. The detachment commander, Wing Commander Coe said: "I am extremely heartened by the very warm welcome that we have received from both our Romanian hosts and American allies here at MK”.

The RAF is no stranger to the NATO air policing mission, it has deployed Typhoons to the Baltic States in recent years in support of the long-standing routine NATO mission. This latest deployment in the south falls under the Alliance's Assurance Measures introduced in 2014, when the Alliance started implementing them with the goal to demonstrate the collective resolve of Allies, demonstrate the defensive nature of NATO and deter Russia from aggression or the threat of aggression against NATO Allies. 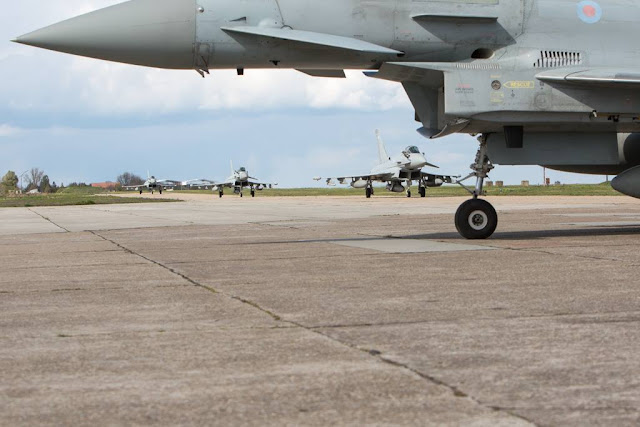 Romania has its own Air Policing assets that are conducting NATO Air Policing under Combined Air Operations Centre (CAOC) Torrejon control to safeguard the integrity of the airspace over the country.

The British RAF aircraft augment the Romanian Air Policing assets and both air forces will conduct sorties in concert with one another. The Typhoons are presently conducting familiarisation flights undergoing a certification by NATO experts from the CAOC Torrejon before they start flying missions.