The high-altitude intelligence, surveillance and reconnaissance aircraft completed the milestone during a strategic mission.

A U-2 Dragon Lady, serving in the U.S. Air Force Central Command, reached 30,000 hours of flight time, Feb. 2, while supporting theater operations in an undisclosed location in Southwest Asia.

The high-altitude intelligence, surveillance and reconnaissance aircraft launched from the 380th Air Expeditionary Wing and successfully completed the milestone at 4:26 a.m. EST while collecting critical, real-time information to give commanders the decisional advantage.

Maj. Ryan, a 99th Expeditionary Reconnaissance Squadron U-2 pilot, flew the aircraft during the achievement.

“It takes a lot of people to launch and recover a jet and to keep this going,” Ryan said. “It’s always been my dream to be an Air Force pilot, so to be a part of something like this is just baffling to me. Today we hit 30,000 hours. I hope it gets 30,000 more.”

“The mere fact alone that we're able to continue flying this aircraft to this day is an achievement in itself, let alone fly 30,000 hours on one aircraft,” Lacey said. “Maintaining the U-2 is often a difficult task requiring maintainers from many specialties. It takes an entire team of skill and dedication to do what these Airmen do every day. They're so good at what they do; they make it look a lot easier than it actually is. These types of milestones are what make us the best Air Force in the world.” 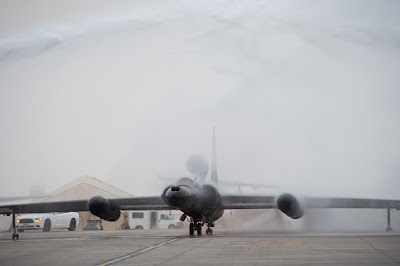 The daily sorties flown by the U-2 have directly impacted the fight against the Islamic State of Iraq and the Levant by gathering information used to disrupt revenue streams and create organizational dysfunction. To date, coalition-backed Iraqi forces have liberated more than 50 percent of their territory from ISIL.

“The accomplishment of the U-2 flying 30,000 hours is extraordinary because the airframe itself is 48 years old and it is flying with the most technologically advanced ISR systems available today,” said Senior Master Sgt. Duane, the 380th EAMXS U-2 maintenance superintendent. “Our maintainers are proud to be part of such a unique history and magnificent aircraft.”

In 2016, a U-2 with the 5th Reconnaissance Squadron at Osan Air Base, Republic of Korea, completed 30,000 flight hours to become the first ever U-2 airframe to surpass the milestone in the U.S. fleet.