During an integration program between US Navy pilots and US Air Force, an F/A-18C Hornet pilot from the U.S.S. Ronald Reagan flew high in the nation's premiere stealth fighter, the F-22 Raptor.

Commander Wosje started out like most, with a dream as a young man of wanting to soar in the sky with little regard of where he was going. After receiving his bachelor's in economics with a minor in computer science, he was 10 years ago left with the dilemma -- Air Force or Navy?

"I ultimately joined the Navy because I thought it was a cool idea to fly from an aircraft carrier," said Commander Wosje.

He was a Raptor project manager and flew test and evaluation missions in the Raptor with the 59th Test and Evaluation Squadron at Nellis.

With more than 2,100 flying hours in the F/A-18 (in 2007), this veteran was stoked to be able to fly one of the newest Raptors coming off the lot in Marietta, Ga. "It was like that new-car smell once you step into the cockpit, and without a scratch on it," said the prior Navy Fighter Weapons School (Top Gun) instructor.

The commander also spoke about the challenges he faces while working with the Air Force and the Raptor.

He said one of the continuous challenges he faces is the barrier of "speaking Air Force." I grew up operating and talking in a maritime-air environment and that has hindered the process of communicating to Air Force members," he said. "But hopefully, before I leave, I'll have a full understanding so I can bring all the knowledge I learned back to the Navy side."

Even his commander noticed a bit of the miscommunication. "I have found myself looking around to see if I'm the only one who didn't understand what he said," said Lt. Col. Daniel Holmes, commander of the 59th TES. 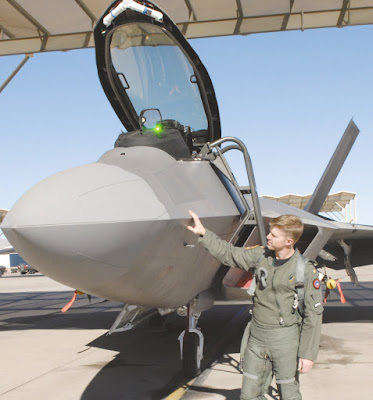 After being at Nellis AFB for about nine months, Commander Wosje has seen what Las Vegas has to offer, but that aside, he said that being able to suit up and fly the Raptor is by far his favorite thing to do.

"All in all, both services will hopefully be able to learn from our respective best practices as a result of my work here. The bottom line is we are all playing on the same team and we all need to be running the same play," said the Navy Notre Dame Fighting Irish enthusiast.

Commander Wosje also spoke on the difference among the previous aircraft he has flown and the Raptor.

"Although the Raptor brings unprecedented capability to a fighter with stealth, supercruise and integrated avionics, it is still built by the same team of contractors who built the last armada of fighters, so you see a little bit of each one of them in the Raptor," he said.

Colonel Holmes added, "When the chief of staff of the Air Force and chief of naval operations made the decision to bring a Navy pilot into F-22 operational test, they picked the right guy. We not only gained joint service support for the F-22 program, but also enhanced all future testing and combat operations in the Air Force, Navy and Marines."

Before returning to US NAvy, "Woog" remained in the USAF for another three years.