The AW609 TiltRotor programme is expected to start icing trials soon following recent ground and flight testing activities. These advances have been made in support of FAA certification, which remains on track for 2018.

The third prototype, based at Leonardo’s facility in Philadelphia, performed several weeks of unrestrained ground testing and, more recently, flight trials that allowed avionics and all systems to be fully tested. During initial flights, the aircraft performed basic hovering and maneuvering and patterns around the airport, concluding with hover landing. Additional flights up to altitudes of 4000 feet with short takeoff and landing (STOL) are planned shortly.

The aircraft will undergo icing trials in Marquette, Michigan, through the winter. The tests will ensure the AW609can fly in known icing conditions and reach operational standards not currently available in any other commercial aircraft.

The fourth AW609 prototype is now located within the main production area of the Philadelphia facility’s assembly line to ensure a smooth transition to the first production build aircraft, also planned for 2018. 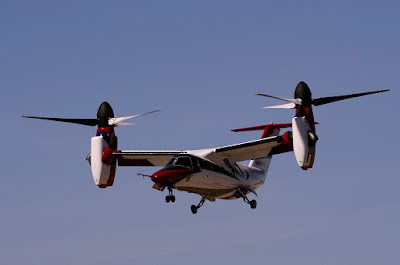 The AW609 TiltRotor combine the benefits of a helicopter and a fixed-wing aircraft into one aircraft. It's a multi-role aircraft can be configured for passenger transport, search and rescue, law enforcement, maritime surveillance, training and other government applications.


Taking off and landing vertically, flying above adverse weather conditions with up to nine people in comfort in a pressurised cabin at twice the speed and range typical of helicopters, the AW609 TiltRotor represents the next generation of aircraft transport for civil (both private and commercial operators), government and para-public roles.