The first upgraded Hawk-i to be displayed at Aero India 2017.


HAL, an indian aerospace company, has rolled out the first indigenously upgraded Hawk Mk132, named as Hawk-i on the eve of Republic Day celebrations. “This is the 100th Hawk aircraft produced at HAL and we are proud that it has Make in India mark. HAL had conceived a programme for indigenous upgradation of the Hawk Mk132 for achieving self-reliance and has successfully accomplished it”, says Mr. T. Suvarna Raju, CMD, HAL. This aircraft would be on the flying display in the forthcoming Aero-India 2017 at Bengaluru, he adds.

The upgrade of HAWK Aircraft was taken up at HAL to so as to be independent in matters such as integration of new sub-systems or modifications, obsolescence management of avionics systems and to enhance the aircraft operational and training capabilities. HAL has rolled out its own aircraft with the upgrade features in a record time. 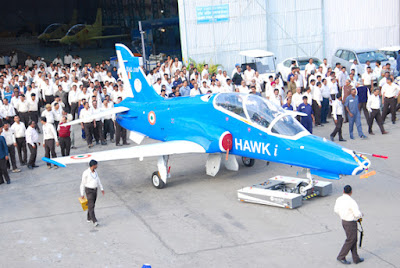