LEONARDO GOES ON THE COMPETITION FOR USAF T-X PROGRAM

The T-X will be the future fighter jet trainer of U.S. Air Force.

After the divorce with the american company Raytheon, Leonardo confirmed yesterday its participation in the U.S. Air Force T-X competition with its T-100 integrated training system. Leonardo will leverage its U.S. company, Leonardo DRS, as the prime contractor, bringing to bear Leonardo’s leading aeronautical and simulation expertise to deliver a fully integrated solution in the best interests of the Air Force.

The T-100 will be a U.S.-based program that will bring significant economic benefits to the country through a newly established and skilled U.S. work force, in addition to the technological and industrial capabilities embedded in newly built U.S.-based manufacturing facilities.

“Leonardo’s commitment to pursue the T-X builds on our deep experience in military pilots’ training and on the competitiveness of our T-100 integrated Training Systems that can meet the U.S. Air Force’s current and future needs” said Mauro Moretti, CEO and General Manager of Leonardo. Bill Lynn, CEO of Leonardo DRS, added that his company “is proud to bring to this highly competitive tender Leonardo’s mature, readily available and technologically advanced solution that will also have a significant economic impact in the U.S.” 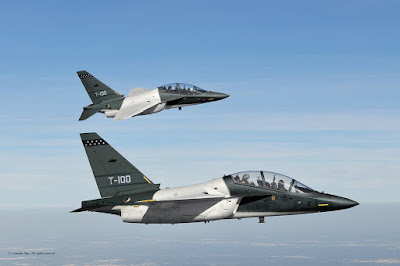 The T-100 is a latest generation jet trainer based on the M-346 aircraft that prevailed over rivals in the most challenging, open competitive bids during the last ten years. The aircraft is already operational to train pilots around the world to fly in next-generation fighter aircraft. The T-100 also features an embedded tactical training system that immerses pilots in realistic mission scenarios.