F22 AND F35 WERE DESIGNED TO WORK TOGETHER

As coalition pilots, intelligence analysts and cyber and space operators convene at the Nevada Test and Training Range, north of Las Vegas, for Red Flag 17-1, they have one goal in mind: work together to defeat the adversary, which at times is 20 living adversaries simultaneously working to attack allied forces on a multi-domain battlefield.

Integration across domains and platforms is an essential practice the realistic combat training exercise emphasizes.

“It’s in our slogan; air, space and cyber space. These are the domains that we operate in. We can fight a war in an air domain only, but we are more effective when you add in cyber and space,” said U.S. Air Force Col. Peter Fesler, Red Flag Air Expeditionary commander and commander of Joint Base Langley-Eustis, Virginia’s, 1st Fighter Wing. “All the capabilities in those domains when combined produce enhanced effects that are more lethal against our adversary.”

Throughout the exercise, fifth-generation fighters - the F-22 Raptor and F-35A Lightning II - have incorporated intelligence, cyber and space information to better support fourth-generation pilots by suppressing targets and dominating airspace.

“The F-22 and F-35 were designed to work together,” said Fesler. “This is the first time we’ve taken the F-22, the F-35 and all of those capabilities the Air Forces of the U.S., the United Kingdom and Australia can bring to bear, and put them together in the airspace at the same time to fight together against a realistic threat.”

According to U.S. Air Force Reserve Lt. Col. Dave DeAngelis, 419th Fighter Wing detachment commander at Hill Air Force Base, Utah, in this Red Flag, pilots saw approximately three to four surface-to-air missiles in one scenario. They can’t always be seen by the naked eye, which is how integration with cyber and space come into effect in aiding the fifth-generation fighters with finding targets for the fourth-generation assets to attack.

“That’s what’s nice about this Red Flag, there are so many assets out here,” said DeAngelis. “It’s been great working with our intelligence, reconnaissance and surveillance assets. They’re able to give us a general location of targets and we’re able to refine it, and hand it off to our British partners that have phenomenal air-to-ground weapons and they’re able to take out those moving targets for us.”

For Royal Air Force Group Commander Graham Pemberton, AEW deputy commander, this Red Flag not only gives the United Kingdom and Australia the opportunity to enhance tactics, practices and procedures across domains with their U.S. allies, but it is also helping them better understand the capabilities of their next aircraft: The F-35B.

“We’ve worked really closely with the Raptor over the last couple of years, so we’re looking forward with how we’re going to do that with the Lightning as well,” said Pemberton. “(Red Flag) is a great insight into how we’ll maximize those synergies and how the Royal Air Force will use their own Lightning, so that’s been a fantastic opportunity.” 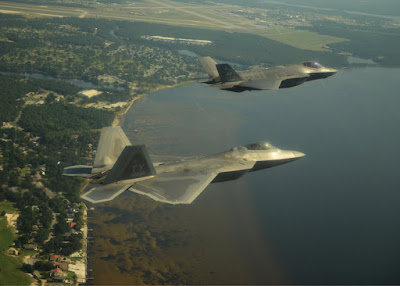 Two weeks into the exercise, Pemberton noticed that the effects of the Raptor and Lightning are different, yet complimentary in defeating an advanced enemy in the air and on the surface.

“We use the (Lightning) in a subtly different way,” explained Pemberton. “It’s being shielded to go into the most deep and complex environments as a lethal scalpel with the Raptor providing the overall control of the air in time and space to get the job done as well, which is working in a complementary fashion with the fourth-generation fighters giving us a massive amount of fire power.”

For Pemberton, continuing training with both fifth-generation fighters alongside fourth-generation assets is vital to success in a multifaceted battlefield.

“I think what has really changed with the fifth generation is how are we going to take on what we face in the future with really complex surface-to-air missile systems and layered defense systems that we have to try and unpick,” said Pemberton. “Space helps us go over it, cyber helps us go under and through it, and fifth-generation assets with fourth-generation support help us go into it, and Lightning with Raptor gives us the real ability to do that on our terms.”