A fog peeled back slowly from the flight line. Four aircrew members emerged from a transit van sharing witty banter and a few cheerful words as they moved their flight equipment towards a nearby KC-10 Extender.

Holiday songs emitted from a Bluetooth speaker while the four aircrew members and two crew chiefs prepared for preflight inspections. A lieutenant cracked open a plastic container of care-package-cookies and passed them around.

Staff Sgt. Aaron, KC-10 flight engineer, shared what being a part of a small aircrew means to him.

“It’s just the four of us; day in and day out, at all hours, they’re by your side. We laugh together, cry together, get mad at each other and at the end of every day we come together to find a way to make the mission work,” Aaron said.

“Just for the record,” KC-10 boom operator Senior Airman Grant laughed and pointed at Aaron. “He’s the only one who cries.”

The two crew members laughed and shook their heads.

When the KC-10 reached its position near Mosul, Iraq Senior Airman Grant was signaled to ready the boom-pod for refueling.

Breaking through a sea of white clouds, two F-16 Fighting Falcons emerged loaded with precision guided munitions. The Fighting Falcons were one of three Coalition aircraft refueled during the sortie; the refueling crew offloaded 108,000 pounds of fuel in total.

“Flying on Christmas day was good for us because every aircraft we offload fuel to is in some form supporting the guys on the ground – who are also missing their families,” KC-10 pilot Lt. Col. Danny said. “The fight against terrorism is 24/7 and we have to maintain decisive airpower over the area of responsibility at all times, even on Christmas.”

While the KC-10 crew was flying near Mosul, Iraq, families all over the world gathered for holiday festivities. Food is one of the most cherished holiday traditions. However, at 30,000 feet, Christmas dinner had limitations.

Two small metal ovens behind the cockpit served as the in-flight kitchen. Senior Airman Grant twisted the black knobs to 400 degrees and set the timers. Shortly after, the front of the aircraft blossomed with a scent of chocolate chip cookies and pizza.

“It’s funny, you know, we got pizza as opposed to being at home with friends and family at a big dinner. But, we make it fun,” Senior Airman Grant said. “It’s kind of cool to see everyone bring the holiday spirit up in the air. We see Santa hats up here and everybody is having fun all the while still executing and doing what we need to do.”

As the sun set on the world a warm glow softly covered the powdery clouds. The white Christmas day turned orange and then purple and then black. Panels of lights, knobs and gauges draped the cockpit like a finely lit tree.

The crew landed safely at their forward operating location and successfully completed another sortie in support of Combined Joint Task Force-Operation Inherent Resolve. 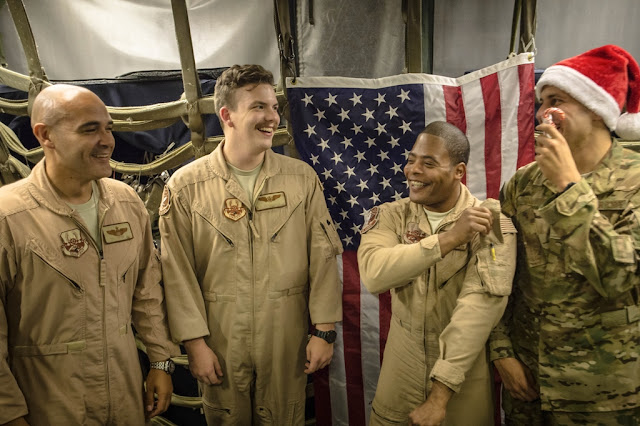