"Texaco 31 authorized to taxiing": we left the square to reach the taxi to the runway 04 as the control tower instructions. The weather was great: moderate wind of about 17 knots only.
We waited the departure of the flight Ryanair before to proceed with runway alignment. "Texaco 31 cleared for takeoff": power to the engines, started the run!

Reached the speed of rotation, the nose of the KDC-10 was lifted and, once detached the wheels off the ground, we followed the planned route. After about 30 minutes we reached the flight operations area in the north of Holland and began to run oval circuits waiting for "Receivers": they were some fighters involved in "Frisian Flag 2016" exercise which is taking place at Leeuwarden air base (Netherland).

We received the fuel demands by three Polish F-16s: in few minutes the fighters were flanked on our left, the Boomer extended the rigid probe placed under the tail and proceeded to refuel them. 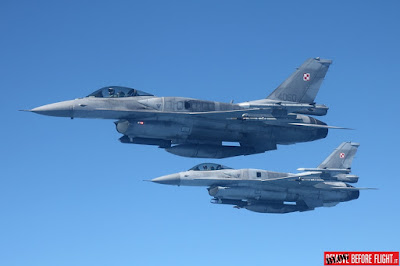 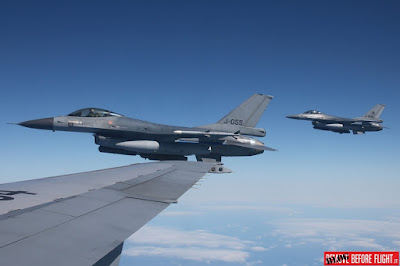 The good weather and the absence of turbulence helped the great success of the operations.
Subsequently we offered the same service to a pair of Belgian F-16s and three Dutch F-16s.

Our mission also included the Air-to-Air Refueling (AAR) and flight formation with other Tanker aircraft: "Marcotte 34" (C- 135 FR) and "Cobo 32" (A-310 MRTT). It was part of the exercise EART 2016: an European Air Refueling Training for tanker's pilots and aircrew. 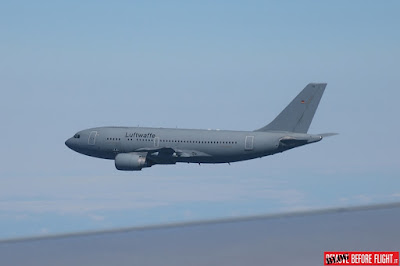 After same minutes of flying in formation our mission was completed, we could return to Eindhoven airport: we started the descent at a constant angle to losing speed and altitude gradually. Performed the maneuver of touch track siding, brakes and reverse allowed us to reach the square to stop in few moments. Throttle motor OFF, this was the end of a successful flight where everything went as planned.